Finding Our Way Through The Aftermath 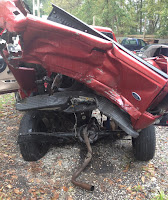 Two years later life has changed. It's been altered. Nothing is the same. On October 12, 2016 my husband was in a severe crash where he was hit at full speed from behind while he sat motionless. That red light in many ways saved his life. He's a professional driver. He carries US mail and was on his way home from work. He usually arrives home around 1:30 or so. But on this night he was running late, after arriving in St. Louis late after his run.
So why would that red light where he was stopped possibly save his life? When the light turned green, before he moved his foot from the brake to the gas, before he shifted gears, he looked behind him. He is always aware of his surroundings. This is something he has instilled in me. Seeing the driver, not breaking, not slowing, but swerving into his slow lane, gave him one second to hang on, to brace himself for the hit that would change his life.

After he was rushed to the ER, after many appointments with specialists, he was diagnosed with a concussion, a brain trauma. I have to admit I didn't know much about concussions before now. I think I could now write a book on the process. He now two years later still suffers from Post Concussive Syndrome. His brain endured three hits that night. The first was when he was hit from behind, then when he flipped end over end, third is when he landed upside down and crashing sideways.

When he finally came to a place where the truck was no longer moving, he smelled gasoline, felt the wetness on his legs and feet, (Later at the hospital they would have to remove his gasoline soaked clothes.), he realized he had to get out. The only way to escape was from kicking his way out of the side window. 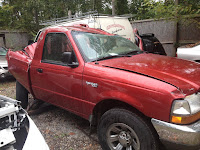 I must share that this is frightening. I wasn't there side by side with my husband. Which he says he is forever grateful I wasn't in the truck with him. He's grateful our grandchildren were not present. Only him. I can only know the fear he endured and is still present today, by the words he has used to describe this crash. Those words haunt me. In the silence of my brain I can hear the roar and explosion of the crash. I can see him flipping end over end, the metal of truck bending and breaking. I'm not sure you can see clearly, but in the underneath of the truck there is nothing left.

He was hit so hard his radio flew out of the insert, his phone contained broken glass in the charger, his glasses were thrown, the bed-cover landed two hundred feet away, not all of the tools in the trunk were ever recovered. You can see from the photos he wasn't hit straight from behind. The car came into his lane and hit from the right side. 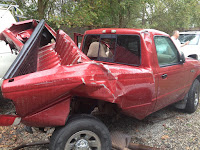 So how is he today? There are days where he feels like the crash just happened. He has memory issues, a fogginess, migraines, nerve pain, neck and spinal pain, mood swings, anxiety, he grows easily tired. Every day is something new. One pupil still remains enlarged, his ears haven't stopped ringing for one second. Two years of hearing constant cicadas, high and low. He too has lost a great deal of hearing. To hear my husband say to me, "Rob, I don't want to become useless.", breaks my heart. He has upcoming appointments with more specialists. We are praying for healing, for good news, to learn more and get him to a place where he can wake without pain. His hearing will never improve. The ringing? That isn't coming from his ears, but inside in brain. This happened from the severity of the crash.

Two years later and we are still waiting for the jury trial. It was scheduled for November 1-2. Dawn Woosley is charged with Assault 2nd Degree-Operate Vehicle While Intoxicated Resulting In Injury-Felony C, with a second charge of Assault-2nd Degree-also a C Felony. The jury trial was postponed  because her defence attorney is facing illness. On December 4 at 1:30 there will be another hearing to reschedule this trial.

On February 14, 2018 the judge revoked her drivers license for a one year period for refusing to admit the breathalyzer. This is seperate from the criminal trial. What are our hopes? She could receive a seven year sentence. We know, although this is not the first DWI she has been charged with in the past, will not happen. So as of right now she is the "accused". We are hoping to hear a guilty verdict. Now, being guilty of recklessly crashing into my husband isn't in question. Her being intoxicated is. She refused the breathalyzer. In this case I wish this crash would have happened in our county and not in the city limits of Byrnes Mill, Missouri. If so, a warrant would have been issued and a blood test would have been given. There is much that could be different in this case. But truth will prevail. My husband will testify to all he seen before and after the crash. I have been preparing for two years now to speak on his behalf in the victim's impact statement at her sentencing. This is empowering for us, the victims, because we will be able to speak the truth. 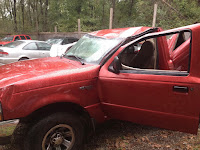 This woman who crashed into my husband, at the time was forty-six year old, a bar owner, and a nurse (Let that sink in for a moment). Why does that matter? A nurse is trained to run to give aid. She is trained to help when she sees someone in need. At the time of the crash she was seen by my husband slapping her leg in laughter with her friend and passenger. There was no running over and checking on my husband. Instead the passenger is seen with witnesses sharing cigarettes. All this while my husband is waiting for the ambulance to arrive.

How should things be? Let us just take out the idea that she could have been intoxicated. She crashed at full speed into my husband. That alone is a felony. Why wouldn't you help the person you just crashed into in the night? Why prolong this with a trial trying to say you are not guilty? A person with integrity and honor, wouldn't do such a thing. We raised our five children to hold themselves accountable for their actions. There is no accountability here. It angers me to hear her defense attorney try every avenue possible to try and gain her innocence.

We are living daily her choices of that day. We may be innocent victims of her poor choices, but we are certainly overcomers with Christ. He moves on behalf of His own and because of Him we have come so very far in this journey. He will continue to lead us, to surround us with godly support and prayer. This journey is far from over. A new court date will only prolong this, but in God's perfected time this portion of our journey will come to an end.

What are my hopes? That she will be found guilty. That my husband will find a place of healing. That our Lord will gain all victory and as our voices on drunk driving will grow. We have a voice and in that we can come together with others to bring about change in these matters. Our laws need to be obeyed and new laws need to be added to make it a first time offense DWI with prison time, not shock time, not a suspended sentence, and nothing of probation. As a bar owner, at the time, she has since lost her bar, should be held at a higher standard. But I say this reminding you that she is at this time, "only accused".

At the time of my husband's crash, this woman who caused his injuries, was a member of a local group my best friend had set up for her son, Donnie Tipton. It was called, "Justice for Donnie", and this group was set up because on September 12, 2014 Donnie at fifteen years of age was hit and killed by four drunk drivers while he waited at 7:10 in the morning for the school bus to pick him up. So, Dawn Woosley was a member of this group in search of justice for the drunk drivers who killed Donnie. That speaks volumes. Ironic isn't it? That two years later she would cause a severe crash and be charged with DWI.

The anger still comes. I weep for what my husband endures. Our lives are altered in so many ways. When that anger comes that is when I open my hands once again and hand it to Jesus. Trusting Him with everything that is behind us and in front of us. I can tell you that is a daily battle for me. As I care for my mother who is in the early stages of dementia, as we care for my husband's parents, and now as we will step up for his brother who is facing possible colon cancer. I am so thankful for our family and friends who support us with such encouragement and inspiration. In our walk it is our hope that we stand in truth and honor so that we can help others facing these same trials.

Friends, if you are facing a journey such as ours, don't give up. Walk in hope. Know there is a greater purpose in the trials we face. God is always at work in us and if we allow, that's the key, allowing, He will move and do wonders in our life in bringing us closer to Him. We may not be able to see the outcome, but He knows our yesterday, today, and tomorrow. There is no wavering in His love for us.

"Do you know? Have you not heard? Yahweh is the everlasting God, the Creator of the whole earth. He never grows faint or weary; there is no limit to His understanding. He gives strength to the weary and strengthens the powerless. Youths may faint and grow weary, and young men stumble and fall, but those who trust in the Lord will renew their strength; they will soar on wings like eagles; they will run and not grow weary; they will walk and not faint."
Isaiah 40:28-31