Its Not Just A T-Shirt 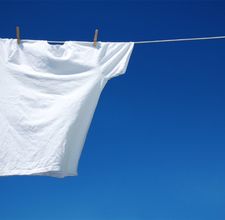 I was bent over and looking at a table when I hear a man's voice, "What does your shirt say?". I turn realizing I was wearing a simple t-shirt I had purchased at our local Goodwill. Okay, first, a great place to pick up comfy t-shirts, and second, I really had to think about what I was wearing at the moment LOL.

I looked down at my shirt and then up at the man in a wheel chair before me. I smile at his tender eyes and say, "Oh, its just a comfy t-shirt". Maybe I should back up just a bit. I was looking in Goodwill for some t-shirts to wear at home and found one that spoke about drunk driving. Well this t-shirt is from a local college and speaks about spring break and how 97% of the students attending this college have designated drivers during their spring break.

This man reads my shirt aloud. At this time we are becoming surrounded by more people that are looking at items near us. He says, "Oh, are you a student?" Bless his heart, right? A student! I could have kissed this man. I tell him, "No, its just a t-shirt". He says, "A professor? Are you a professor?" Okay, by now I am simply falling in love with this man. Again I tell him, "No, sir. Its just a t-shirt I picked up".

See, when I was in Goodwill and spotted this cute t-shirt I thought of more than comfort. I had immediately thought of Donnie. My friend's son, Donnie, who was fifteen when he was hit and killed by a drunk driver. Donnie was simply waiting in the drive way for the morning school bus. When I seen the t-shirt I had thought it could be an opening for a conversation about how it only takes one drunk driver to take a life. Only I never expected it to happen. Oh, our God is BIGGER than we can imagine!

He is still asking about the t-shirt and once again I tell him, "Its just a t-shirt, but when I purchased it I thought it could be an opening for conversation about drunk driving". I well up with tears and tell this man I have just met about Donnie. The man becomes emotional. As I am sharing Donnie's story people around us are beginning to really listen.

This sweet man continues in conversation with us. My husband is listening intently to this man's story. He shares that when he came home from the Korean War he was battling PTSD. He shares that at the time they didn't have a name for it, but now it is well known. He shares how his life was spinning out of control. He doesn't want to speak about the war he witnessed and lived through. I can tell it is still traumatic for him. He shares how he started picking up the bottle. He became a drunk and would drive daily with his body inundated with whiskey. He says, "I have no idea how I got home after a day of drinking".

He tells us his wife gave him a choice. The bottle or their marriage. He chose their marriage. He put down the bottle and never again took a drink. He continues with his story. He and his wife have been married for sixty-four years. He says, "I kissed my wife on the forehead every morning and night. She is now in a nursing home battling Alzheimers and I still kiss her on her precious head, but now she no longer knows my kiss." At this point tears are falling and my husband is about to lose the tears he's trying to hold back. He says to us," I can see how much you love one another. It shows just in your presence together. Kiss each other daily, never taking a moment for granted. Kiss one another and remember your love".

I wanna take this man home with us. I want to hear more of his stories. He says to me, "Never say, its just a t-shirt. That t-shirt caught my eye and brought me back to a time when the bottle owned me. That t-shirt could change someone's life. Your 'just a t-shirt' gives way for you to share your friend's story about her son and his life on this earth and why people should choose not to drink and drive. You keep wearing that shirt and take every opportunity you can".

By now my hubs isn't holding back his tears. My heart is so full at this very moment over my, 'its just a t-shirt' answers. I know my Jesus enough to know that this wasn't just a chance meeting. He ordained this meeting with perfection. Not only did God give way for me to share Donnie's story, but also to hear this man's precious story about redemption and healing. To hear of a love story between this husband and wife. To just open our hearts to a stranger can give way for God to move in a way not expected by us peeps just wearing a t-shirt with a hope to share.

Before we ended our conversation I took this man's hand in mine and thanked him for his service and for sharing such a personal story. He smiles at me and says, "You keep doing what your doing and don't you put that t-shirt away".

This taught me a valuable lesson. When God places something in our heart and gives us a mission He will forever provide the way. He will show us that nothing is too big for Him. I will continue wearing my t-shirt with a mighty hope. Oh, may we walk daily realizing that with God nothing is ever 'just an anything', but always an opening for Him to move in a mighty way! He can take a blank canvas and write upon it His story and way for the world to take witness to His mighty glory.