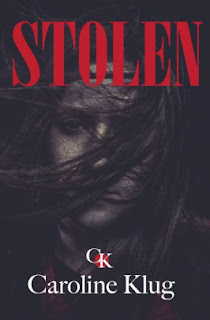 I love reading novels that leave me with something. A nugget, something to ponder, something that causes a change within me. This is just what happened when I read, Stolen, by Caroline Klug.

Maybe what I love most is that this isn't just a thriller. It isn't just a read for leisure. It's one of those exceptional novels that is weaved together with an important message given to us through an allegory. This thriller connects us to these penned words through the verses that come from Colossians 1:13-14 "For He has rescued us from the kingdom of darkness and transferred us into the Kingdom of His dear Son, who purchased our freedom and forgave our sins."

The writing is strong and poignant with a message of hope. When darkness lies all around us, when we feel lost and worthless, He is there to show us His light and make a way for our escape from the darkness into His grace and freedom.

Each chapter travels from past to present that leaves the reader with a constant twist. I have to share that the first few chapters were difficult for me to read. It wasn't the writing. Klug's writing is exceptional. She draws in the reader with such descriptiveness that you can only imagine yourself in the position of the character facing their circumstances and choices. It too was the truth in her penned words. The deep and utter brokenness that moved me. Klug's writing is so descriptive that it brought me to feel the desperation in the characters. Their hearts are open for us to see. Their fear becomes our fear. The terror they feel isn't something made up, but is something very real for thousands each and every day. Stolen brings the reader to look outside their own backyard into the world around us that is very real, but can easily be missed if we are not paying attention outside of ourselves.

With Klug's allegory it makes this novel so much more. It brings a message of redemption. We find within these pages characters that believed lies told to them. In fact they believed so much in those lies that they became those lies told. Their choices no longer right and wrong, but what the lie has developed within them. Very much to the degree of just living, taking a breath and trying to survive. This soon is life and they can't imagine a anything different.

Something else that I love about this novel is that when the main character changes her name she does so that no one will know the her real name, who she is or where she came from. The name she goes by is Star. For me, whether or not the author meant this to be huge, it was very poignant for me.  Star may have been trying to remain hidden from the world, unknown to everyone around her, but to God, to her Savior, she was a star, one that He knew before, in her present, and would know her future. Whether or not she realized it at the time, she may have not known Him, but He certainly knew Star.

Those lies changed Star. She didn't begin her life as Star but with another name. One that she had forgotten. As the lies became her new life her past faded from memory. She wasn't necessarily trying to forget who she was. She wanted to run away to something better, but one choice led to another and soon her choices were no longer her own. She now became owned by another.

We see characters being held captive. Chains holding them in a darkness. Sex-trafficking is real and it is all around us. It is in our small towns and big cities. Klug brings to light a message that we try to ignore. I applaud her for writing with a purpose. This is one of those novels in which our time invested leaves us with more than we ever expected. At least that's how it was for me. Now more than ever we learn of sex trafficking and the horrors of these girls being kidnapped, now at ages of seven and nine, into a world where nightmares are now reality.

This is one of those novels that will stay with you. At least it has for me. I seen a review that said something along the lines that as a reader she found it hard to understand the characters choices because she wouldn't have made the same. We tend to think this way when something seems near impossible to us, don't we? We simply can't imagine. Brokenness and lies bring the soul to be held captive into believing we are worthless and useless. We find ourselves in positions we never imagined possible, but there we are and now our next step seems immovable. But then there is love, grace, and mercy. A hand reaching out. Truth seeks us. His hand guides us. There in the midst of our impossible becomes possible through Him.

There's another aspect I loved. A character that isn't seen a great deal within the pages, but his character is so powerful for me. Star's father. This runaway thinks she's forgotten. The lies have told her no one wants her. Her unworthiness has made her an outcast. She's told lies that her father doesn't want her. Never wants to see her again. But what I love is that he never gave up searching. His love remained. A love that was unconditional. He is there with open arms. A father of grace. For me, this was a clear example of our heavenly Father's unconditional love. He's there. Never leaving us.

If we listen to Satan, if we listen to his lies we will soon be believing that we are just as he says. Unloved and unwanted. It is a daily struggle for so many. This is one reason Star never tried to escape her capture. He said he was trying to protect her. Trying to keep her safe away from those who didn't want her and would never believe her. She is no longer running away, but running toward her father. Oh, this picture of grace and redemption stirs my soul. I love that moment she realizes the lies that held her still and remembers the truths within her brings freedom. They may have been buried, covered with deceit, but never absent, always remaining to be brought to light.

We are given a glimpse at this new life. Our main character no longer goes by Star, but her given name. The one that speaks truth of who she really is. As we turn the last page we witness this hope as her new life begins. This is one novel where everything has meaning. A story with a purpose. She is ready and willing to share her story, to touch hearts of others. She is now living with a new outlook. She was saved. Her father waiting with open arms. She wants to live out that same hope to others who are hurting and in need. She wants others to know their worth and that amazing grace she received.

If you're searching for something different, something more than just a good read, I encourage you to grab a copy of, Stolen. It will take you on a journey to places unexpected and hearts unknown to a place of peace and renewal.

This novel was a gift from the Caroline Klug for sharing my review with you.