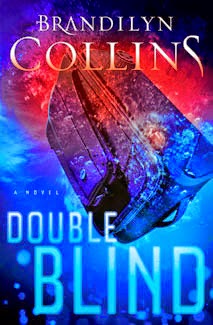 This novel ROCKED!! Okay, Brandilyn Collins always gives the reader storytelling at it's very best. She grabs the imagination and pulls the reader into another dimension. I always LOVE her novels, especially her series, but his novel really had me pondering the thought of what would I be doing if I were the main character, Lisa Newberry.

Lisa Newberry is a woman in her late twenties. Life has become unimaginable. Tragedy has struck over and over again in her life. She's lost, at the end of her rope. She wants to just give up. Trying to make it through another day seems to be too much for her.

Here's the gist of the story, without giving any details away. She's depressed. Who wouldn't be after going through all she has been through! A new trial has come along and Lisa has been accepted to try this chip in her brain. It's a Double Blind placebo, hence the title. But hang with me. There's so much more to the title!

So, Lisa goes into all this blind. She has no idea what's about to happen. She's coming from tragedy and about to experience a whole new kind of fear. All she knows for sure is that she wants fixed and fixed now. So much goes wrong and for that info you will have to read the novel!!

Here's why I enjoyed this novel so much. We are not at all unlike Lisa. We want a quick fix and when we are hurting and not sure how much more of life we can take we are going to do whatever it takes, whatever the risk, to get better right now!!

I'm not sure I'd allow someone to place a chip in my brain, but I'm not in that position. There are all kinds of secrets going on beyond what Lisa is privy to. She thought she was living the unimaginable, but now she is really floating in the unknown and she is terrified, but that was the risk she was willing to take. She just didn't expect what was to happen next. She was too trusting of the people who were wanting her to do the double blind placebo.

This is what Brandilyn does best. She makes the reader ponder. She lights the imagination and gives the reader room to take off on their own journey. Makes me ponder the idea of how many people would line up to receive the Mark of the Beast, how many people are so trusting and believe whatever they are told because they are in search of something that lead them out of their pain and bring easiness to life.  As a people we are so wanting that we are willing to do whatever, no matter the cost. Without our Guide and faith to lead us through the times that seem so far from hope we will continue to slip into a life of nothing more than a continued seeking in the wrong places.

See, Lisa wasn't trusting God anymore. She went searching elsewhere for all she needed. After life hit her hard she was giving up on everything. Now she is looking for people who will believe her, but this unimaginable story unfolds she found herself in a place that is far worse.

It is the one woman who she's been away from for a very long time that brings her to a place of faith and peace. Lisa has been desperate her life for something to make sense. As her journey unfolds before us we travel with her as she experiences the unexpected, but finds that God has never once left her alone.

This novel was a gift from B&H Publishing Group for sharing my review with you.

Brandilyn Collins is a best-selling novelist known for her trademark Seatbelt Suspense®. She is a three-time American Christian  Fiction Writers Carol Award winner and has received Inspirational  Readers’ Choice and Romantic Times Reviewers’ Choice honors. Brandilyn  and her family have homes in California and Idaho.